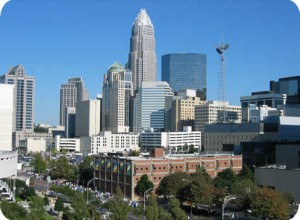 So here’s what I’m learning on my 10-day trip to Charlotte with my almost-two-year-old.

Having mastered the weekend road trip, on to the airlines! With the new restrictions on beverages, I was worried about takeoff and landing. Luckily, the crew at NWA was very accommadating when I handed her a sippy cup and asked with doe eyes for some orange juice for the boy.

I had brought the car seat on board because everywhere said it’s the right thing to do. I’m checking it on the way home. Not only was it a royal pain to install, I couldn’t get it undone by myself! Remember, to undo the seatbelts, you have to lift the little flap. With the carseat securely in place, I couldn’t get to the flap. A helpful passenger reclined the seat and loosened the belt to get it undone. He said, “We check ours.” “Good call,” I said.

Toddler Boy was great on the plane. He watched a movie on the laptop while I fed him the Lunchables I brought on board. Then, as soon as the clouds covered the view, he fell asleep and awoke on land. YAY!!

The hotel is good, the area is GREAT. We’re staying in a Marriott Residence Inn. Nice, because it has a separate bedroom and a kitchen. The area is near SouthPark Mall. A few blocks away we found Park Road Park. There’s a wonderful playground with a separate tot lot, the rubber matting all around, 6 slides, picnic area, and most importantly: lots of shade! It’s really tucked back into the park, so we hardly remembered how close to busy roads we were.

The South Park Mall is undergoing some construction at the moment. For my Bob the Builder(tm) fan, this is a fabulous thing. Every morning before the mall opens, we go see Muck, Scoop, Rolley, and Lofty. The workmen seem to enjoy the audience, and share the stories of their sons and grandsons with us.

Lunch and dinner are easier with my little meal setups. I put a disposable fork and spoon, placemat, and wipes in a baggie all inside a disposable sippy cup.
Pop the filled cup in my purse, and we’re off.

I do diaper setups, too. A diaper, paper towel, mini disposable changing pad, and wipes in a baggie, all inside another baggie. When the diaper’s changed, the soiled diaper goes into the baggie and it all goes in the trash. Actually, I’m kind of the queen of plastic baggies. Not at home, because it’s not PC, I know. But on the road, convenience is key. Fumbling around an airport bathroom to change a diaper is a nightmare. The diaper setup is so slick… and no smell left behind for the next guy.

Before our trip, I asked the hotel to send me a map that shows stores and parks. I went online and mapped our things we needed, like grocery stores, baby supply stores, etc. and marked them on the map with post-it flags. Then used Google Earth to see which parks had playgrounds. How slick! We were here about half an hour when Hubby had to check in to work and asked me if I knew how to get to the grocery store. I was able to rattle off directions like a native thanks to my before-trip research.

Carseats on the plane »