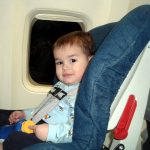 Okay, so here’s my story of bringing my carseat on the plane. Before buying the forward-facing carseat, I researched which ones would actually fit in the 17″ airline seat. I decided on the Britax Roundabout Convertible Car Seat

because a.) it fit. and b.) Britax makes airline seats… or rather, their parent company does. I want to go on record that I love this carseat.

All the written documentation and safety advisors say bring the carseat on the plane. Many people claim to have done this with great ease. So I did. I lug the seat, my carry-on, and my child on the plane, my husband begging to help. “No.” I say, “I need to know I can do this alone on the way back.” He looks sheepishly around at the other passengers who did not hear our exchange.

I buckle the thing in, then buckle in my son. Now my 2 year old is so tall, he physically can’t keep his feet off the seat in front of him, which to him is pretty fun. So I repeatedly tell him to stop. Forget the tray table. He is not happy. Neither is the guy in front of him. For the first time, my happy traveler is no picnic. I start to wonder about the real safety factors of this situation. In case of a real emergency, I now have wrestle with a 5-point harness system?

Now we land. I can’t get the stupid thing out! You see, in order to get it safe and secure, I had to trap the seatbelt buckle under the carseat. Remember, in order to undo your seatbelt on the plane, you lift the buckle. I chewed up my arms trying to get at it, when a friendly passenger came to my assistance. He simply reclined the seat, reached his arm in, and undid the buckle. Sweating like a pig and arms bleeding, I humbly thanked him. He said, “We check ours.” “Good call,” I said. While stuffing the carseat into the carseat bag (the 2-in-1 Car Seat Cover ‘n Carry

), a baggage handler was standing by to help. (Because we were holding up the plane) He complimented us on our carseat bag, and wished more people would use them, noting that most people use garbage bags when checking their carseats. Duly noted.

On the way home, I checked that carseat, and have done so ever since. My child is much happier (as are the surrounding passengers) when we buy him his own seat, buckle him in the airline-provided seatbelts, and he can watch a movie with his headphones until he falls asleep… which he does for the entire flight. I feel comfortable that he is safe, and my happy traveler is happy again. So then, are we.

« the pilot episode
Dining out with your toddler »