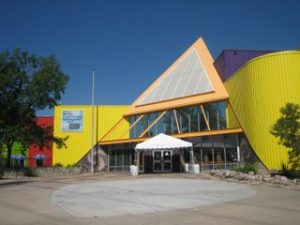 Our reciprocal museum membership back home got us in free to the Children’s Museum of Denver, so we went 3 days in a row. The first two days I had to drag Toddler out kicking and screaming. “Wait! I want to see something else!” he wailed at the top of his lungs. Luckily, he wasn’t the only child to do this upon exiting. As you can guess, kids really like this place! The third day, I gave him more warning. I said, “OK, it’s time to go. What would you like to do again before we go?” After going through the rabbit hole again, he walked out calmly and bubbling about how much fun he had.

Note to self: let him choose his final activity.

There were several exhibits he enjoyed; painting, puppet show, hearing the heartbeats of different animals, playing on a real fire engine. But, the real highlights were the grocery store/restaurant, and the forest. 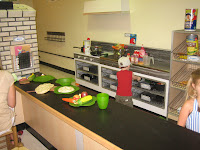 The grocery store had shopping carts, all the food group foods, a cashier area, and a restaurant. Having a chef for a daddy, Toddler spent a lot of time in the restaurant. He put everything on the grill like a true male; pizza, corn, spaghetti, eggs, celery… then he put it on plates and served it to us customers (moms & dads) at the counter. It was delicious!
The forest was another favorite adventure area. As you round the corner, there’s a hill to climb. At the top of the hill was a hole. Where did this hole lead? Toddler was curious, but very sceptical. I went with him down the hole and we had the choice of popping out of one of three tunnels! Of course, he had to go it alone and try out every hole (aka: rabbit hole), several times. Up the hill, down the hole and out the tunnel, again and again and again. Finally he decided to check out the rest of the room and found giant birds’ nests. “Help, I’m stuck in the bird nest cage!” he’d shout. (he wasn’t really stuck, just pretending.) 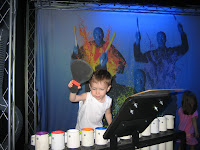 We were lucky enough to visit during the Blue Man Group traveling exhibit. Hubby and I saw them off Broadway a few years ago pre-child. It was a really fun show. This exhibit was just as fun! Toddler paddled the pipes just like the real BMG. He heard his voice change by pushing different buttons while singing into the microphone. He loved the crazy lights tunnel!

I highly recommend this as a place for the under-8 set. It’s also very near the Downtown Aquarium, Six Flags, and Confluence Park if you’re planning a day in the city.