If you have a budding archaeologist, or even if you don’t, Dinosaur Ridge is a definite must-see. 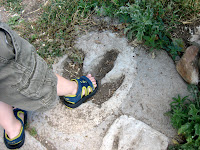 The first thing I noticed was how small the actual dinosaur footprint fossils were. (That’s my 3-yr-old’s foot… infant size 6!) From the movies, I’d expect much bigger feet. As I commented aloud, a 9-year-old dinosaur professor informed me which prints belonged to each dinosaur. I was really impressed… then I saw the chart around the corner mapping it all out. However, he learned something there that he was proud to share. And that’s what traveling is all about. 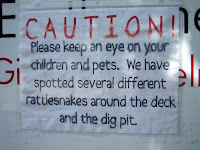 I learned that rattlesnakes are more active in hot weather.

Thankfully, we were not the first ones to play in the dig pit, so (as I also learned) rattlesnakes would rather not be where kids are playing. We did not do the extended walking tour, but I imagine you’d want to watch your step there as well. Locals think of them like Minnesotans think of bees, an expected summertime pest. But, at least you know to avoid them.

This dig pit was so fun! My little guy could have stayed in here for hours! All around there’s tons of educational information on attractive, colorful charts and signs. Between the walking tour, the self-guided tour of the grounds, and the gift shop with tons of dino-phenilia, there’s really something for all ages here.

It’s also part of the Lariat Loop and very close to Red Rocks, if you’re charting your trip.