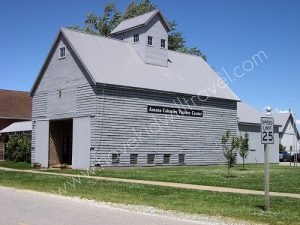 Iowa doesn’t come to the top of very many “must see” travel lists.Perhaps it should.As recently as the early 1800’s Iowa was about as far west as you could go and still be in “civilized” territory. California and the southwest weren’t made US Territories until 1848 and the famous Pony Express didn’t begin until 1860.

So, in 1855, when the Inspirationists were looking for a place to expand their religious community central Iowa was their landing spot.They established 6 villages, each a mile or two apart in a circular fashion; easily reachable by wagon or walking.The 7th village of Homestead was later added to give the Amana Colonies railroad access.(Their very interesting history can be read here.)

The Amana Colonies went on to become one of the largest and longest lived religious communal societies in America, setting aside the communal way of life in 1932.The Amana Society, Inc. was developed and the name Amana soon became synonymous with high quality goods (think appliances, woolens and furniture).In 1956 the Amana Colonies became a National Historic Landmark with historic sites maintained and accessible to tourists.

There is never a bad time to visit “the Amanas” (Amana, East Amana, West Amana, South Amana, High Amana and Middle Amana), festivals and events run year round, highlighted by the four largest:

With their German heritage, Oktoberfest is highly popular- you can celebrate with a lager from Millstream Brewing Company, a local microbrewer and some lively polka.

The deep winter chill of January brings Winterfest with “old time” experiences like ice harvesting, stories of “Old Amana” and a communal dinner as well as fun like ice sculpting and cookie decorating.

And, my favorite of all the festivals, Prelude to Christmas.The streets and shops are decorated and waiting for you to find treasured gifts.A Tannenbaum Forest fills the 100 year-old Festhalle Barn and Santa is there to great those young and young-at-heart.

Shopping abounds in the Amana Colonies.Many local artisans sell their wonderful items in the stores that line the main streets.Six local wineries tempt you with their wonderful, fruity blends.Handmade chocolates beckon you from one side of the street while fresh baked treats taunt you from the other.And wonderful, fresh meats and cheeses from the heart of the heartland.(If you prefer a more “urban” shopping experience Tanger Outlet is just minutes down the interstate and boast shops like Coach, Brooks Brothers and Eddie Bauer, to name just a few.) 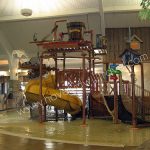 Make the Amana Colonies a long weekend trip by staying at one of the many Bed and Breakfasts.If you’re a golfer the Colony Oaks on the top rated Amana Colonies Golf Course offers condos.Bicyclists will also appreciate this location as it links easily to the trail that connects the Colonies.If you’re traveling with a younger crowd (13 and under) I would suggest staying at the Amana Colonies Holiday Inn as it is attached to Wasserbahn Water Park.In fact, water park passes are included in many room rates.  Check here for the best rates.

Jody is a native of Iowa and loves to travel with her kids.  Read more travel tips on her website HaveKidWillTravel.com.  “In America there are two classes of travel: First Class and With Children” (Robert Benchley)  We’re the latter…

Eating in the Amana Colonies is a joy- especially if you like German food.Family style restaurantsabound, all serving roughly the same menu.My favorite of these is the Colony Inn, the first restaurant in the Amana Colonies.If kraut and wursts aren’t quite your thing you can find a sub shop, a pizza place and a Maid Rite.(Williamsburg, just down the interstate, has other options, as well.)