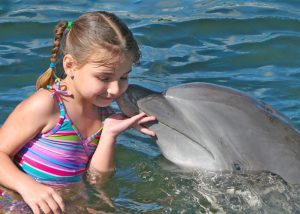 I guess I’m just an island girl at heart.  I love the casual, relaxed atmosphere of the Florida Keys during the day, and the pulse of action in Key West at night.  For a family vacation, I skip the night life, obviously, but there is so much for kids to do in the Keys; I’m hoping my son will become an island boy at heart, too.

It takes about 3 hours from Miami to Key West, so check out our article on Keeping the Kids Occupied en Route for some ideas to pass the time in the car.  However, you might consider making a day of it and making a few stops along the way.  Or, do as we do and stay in Marathon, the halfway point, so that either direction offers a reasonable day trip.  Many cruise ships port in Key West, so many people go a day or two early and spend some time in the Keys before heading out on their Caribbean cruise.

Taking the kids to the Florida Keys can be a blast if you know where to look.  From dolphins to coral reefs to ice cream shops to white sands in turquoise water, this string of islands is a family paradise.  Best of all, you can get there by car.  So grab your flip-flops, set your ‘tude to mellow, and kick-back.  Tour the Keys with us through Gateway and Upper Keys of Islamorada and Key Largo, through the Middle Keys and Marathon, down to the Lower Keys and Key West.

Insider tip: When riding jet-skis and such, keep an eye out for jellyfish; they tend to congregate near the docks.  February seems to be high season for jellyfish.

Driving down from Miami you’ll start to feel like you’re in a whole new place.  Even directions seem foreign.  When looking for the Islamorada Fish Company for lunch, for example, your directions read MM 81.5, Bayside.  What the heck does that mean?  In the Keys, all addresses are based on their Mile Marker number.  (81.5 in this case) The Mile Marker signs are green with white lettering.  You’ll get to know to watch for them.  Then, Oceanside or Bayside … South for the Atlantic Ocean, North for the Gulf of Mexico (bay).  So much easier than watching for street signs, right?  –read more–

I’ve spent a lot of time in Marathon since my in-laws have a place there, so I know that area of the keys the best.  Its central location makes Marathon the perfect base camp to the entire string of islands.  It’s less than an hour and a half drive to either Key West or Key Largo.  Here are the highlights of our favorite attractions for kids in the Florida Keys.  –read more–

Key West is one of my favorite vacation destinations.   It’s a treasure trove of unique, and slightly odd, sightings… all done in a playful way.  In fact, it seems the entire attitude of Key West is “come out and play”.  Even though it’s known for its adult attractions, there’s plenty for kids to do here.  –read more–