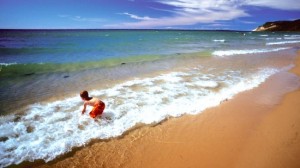 I don’t know if you’ve ever been to Traverse City, but in summer we’re a sort of Great Lakes version of Nantucket – only lots cheaper. Lots of beaches (we have actual SAND over here) and a great deal of forest and meadow for hiking, cycling and goofing off. All of which happens to be pretty much free. Families have been coming up here for more than a century, and they’re still at it.

Anyway, as a parent (I have a son, Jacob, and a daughter, Elizabeth) I really like this idea of finding the little secret ways to save money. Here are some of my own recommendations:

Sleeping Bear Dunes National Lakeshore
This is a breathtaking symphony of water, sky and towering sand dunes – some as much as 500 feet high – on the Lake Michigan shoreline of the Leelanau Peninsula. Part of the national park system since 1972, Sleeping Bear is one of America’s most profoundly beautiful landscapes: a 64-mile curve of beaches, coves, islands, forests, meadows and lakes along the west coast of the Leelanau Peninsula. Its grandeur can be viewed from well-placed overlooks along the Pierce Stocking Scenic Drive — but it’s even better to see the park close up and personal by visiting its fascinating museums, hiking its trails or even taking a ferryboat ride to the unspoiled Manitou Islands. Best place to start is at the Visitors Center in Empire, where you can watch a short video, visit their little museum and let one of the rangers help you plan a kid-friendly day. Empire, Glen Arbor and Leland are quaint little towns where you might stop for good and sightseeing – take the kids to Cherry Republic in Glen Arbor for lunch. They’ll LOVE it. Lot’s of free treats.

Culture on the Cheap: The Interlochen Center for the Arts
Every summer since 1928, over 4,000 young musicians, artists, dancers, writers and actors have gathered to study, practice and perform at this magical retreat among the pines. Part summer camp, part boarding school, part concert hall, the Interlochen Center for the Arts is also a wonderful place to enjoy some of the world’s most talented performers in an idyllic setting of woods, water and wonder. But the 1,200-acre campus is busy even after September arrives, since it’s also home to the Interlochen Arts Academy, whose 455 students and 81 faculty members produce over 250 concerts, plays and exhibitions of their own. Despite its secluded forest setting (about 20 minutes from downtown Traverse City) Interlochen is a magnet for lovers of music, drama and dance. Big names come here to perform in the summer, and the tickets can be pricey – but here’s the tip: you can just wander in and sit in on all kinds of rehearsals, practice sessions and concerts by the students almost any time you want. You might hear the next Jewel, Josh Groban or Norah Jones – they all spent summer here.

The Old Mission Peninsula
Almost 20 miles long and in places only a mile wide, this lovely ridge sticks out into the middle of Grand Traverse Bay like a skinny finger covered with orchards and vineyards. Visit the lighthouse at the tip of the peninsula, exactly halfway between the equator and the North Pole, stop at lovely Haserot Beach (right across the road from my house) and trot into the Old Mission General Store for an ice-cream cone or some penny candy. It’s a ways out of town, but absolutely not to be missed. The owner, whose name is Jim, is a former actor who once played Stanley Kowalski in Streetcar Named Desire.

The Music House Museum
This funky place is dedicated to all the machines and gadgets created in bygone times to record and play music. Its collection of rare player pianos, pipe organs, early phonographs, nickelodeons and other music machines isn’t just for looking at; those machines produce toe-tapping rhythms that will get the whole family smiling.

The Great Lakes Children’s Museum
This museum features hands-on, interactive, family fun focused on water and the Great Lakes. You can explore the lighthouse, pilot the Great Lakes freighter, or change the flow in the water table. Kid-sized and filled with fun exhibits and activities to discover together

Beaches
We’ve got dozens of them. A favorite is Clinch Park, located on Grand Traverse Bay in the heart of downtown Traverse City, a family favorite for visitors to the area and residents alike. A visit to Clinch Park isn’t complete without a ride on the mini-train, with seating accommodations for everyone in the family. Stop at the nearby beach and enjoy a refreshing swim in the Bay. Clinch Park is just one block from downtown Traverse City’s shopping district with over 150 specialty shops, restaurants, sidewalk cafes and coffee shops. Other beaches close to downtown are West End and Bryant Park.

The Grand Traverse Commons
OK, maybe a former asylum for the insane is a weird place to recommend for kids, but it’s really cool! In 1885, the state of Michigan built a mental asylum in Traverse City. Following the then-current mental health philosophy of “beauty as therapy,” the state designed a gorgeous complex of gothic castles set in a landscape of meadows, hills and forests. When the asylum closed in the 1970s, most of the property (including the buildings) was set aside for redevelopment and public use. Today it’s called the Grand Traverse Commons, and while developer Ray Minervini is slowly converting the old castles into retirement housing, retail space and restaurants, the 480-acre wooded park around them has become our Central Park, a beautiful place for people to walk dogs, hike and bicycle, ski and snowshoe. And because the former asylum administrator was a collector of rare trees, the place is planted with dozens of species that don’t grow anywhere else around here – so in fall kids come here to collect leaves for their science projects. It’s one of my favorite places in the fall, and hardly anybody outside of town knows about it yet.