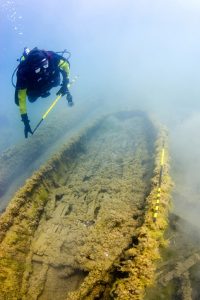 There’s a saying in northwest Michigan’s dune country. The sand gives, and the sand takes away.

Over the years, the golden sands along the towering Sleeping Bear Dunes have buried farms, forests and settlements. Just as unpredictably, though, they can retreat and bring to light what they have buried — as happened, for instance, in the case of the Three Brothers.

A 160-foot wooden steamer, the Brothers ran aground in 1911 on a sandbar off the coast of South Manitou Island and vanished without a trace. For nearly a century, boaters and beachcombers fished and swam right over the wreck without knowing it was there, until the current shifted the sand away in 1996 and uncovered the vessel – completely intact — in a mere 12 feet of water. Since then it’s become a magnet for scuba divers and snorkelers from all around the country.

Although the waters around Traverse City lack the coral reefs and technicolor fish of the tropics, they’re a popular diving destination because they’re so rich in shipwrecks. Most date back to the middle of the 19th century, when the region teemed with schooners, tugs, fishing smacks and steamships of all shapes and sizes, but some are as recent as the 1990s.

“The Great Lakes have more shipwrecks than anyplace else in the world, and they’re in much more pristine condition than, say, the Caribbean, because they haven’t been eaten away by salt water,” says Jack Enger of Great Lakes Scuba, one of several Traverse City dive shops that serve the area’s growing number of underwater visitors.

Thanks to Lake Michigan’s cold, fresh water, these wrecks are underwater “time capsules” — so well-preserved that even small items like cutlery, machinery, ornaments, and porcelain cups remain unharmed and in their original locations.

Underwater tourism is increasingly popular in Traverse City, particularly in late summer when Lake Michigan and Grand Traverse Bay get warm enough for deep exploration. But the best diving is in autumn, says Enger; the water’s still warm, but there’s much less recreational boat traffic and the already phenomenal clarity of the water is at its best. Divers who don’t want to lug their own gear around can rent from local dive shops, which also run organized wreck-diving groups and provide scuba instruction for novices.

The best shipwreck-hunting grounds in the region are in the 282-square-mile Manitou Passage Underwater Preserve, just off the Sleeping Bear Dunes between the Manitou Islands and the Leelanau Peninsula. A protected “short cut” for shipping since colonial times, the Passage contains the wrecks of over 130 ships — only 16 of which have been found.

One of the easiest to spot is the Francisco Morazon, a steel-hulled freighter that ran aground on South Manitou in a 1960 blizzard and can now be seen half-submerged just a few hundred yards offshore in only 15 feet of water. The 246- foot ship can be easily explored with fins, mask and snorkel. Just a few hundred yards away is the Walter L. Frost, a wooden steamer that ran aground in 1905. Though it was somewhat damaged when the Morazon sank on top of it, the Frost is a favorite with divers because large sections of the hull with machinery, boilers and related artifacts are open to divers of all skill levels.

More wrecks can be found even closer to Traverse City itself, in the sheltered waters of the Grand Traverse Bay Underwater Preserve. The A. J. Rogers, a 138-foot wooden schooner that sank in 1989, lies just 4.5 miles off the tip of the Old Mission Peninsula. Just a few miles south of the point, along the East Bay shore is another schooner, the 125-foot Metropolis, whose keelson is in only five feet of water and a popular snorkeling destination. (Much more of the ship is a few yards to the east, over the edge of a hundred-foot underwater cliff.) The Tramp, a 54-foot tug, lies in 44 feet of water in West Bay, near Power Island.

Nor are shipwrecks the only interesting artifacts to be found in these waters. Many divers enjoy poking around the area’s extensive dock ruins, where massive pilings were driven into the sandy bottom to create docks and wharves for the schooners and steamers that plied the region’s waterways a century ago. Long abandoned, they attract large schools of fish and contain many artifacts, including anchors and pieces of shipwrecks. (One of the strangest collections is the popular “junk pile” near Old Mission, which includes a host of sunken artifacts from the 1950s, including several well-preserved cars and boats.)

Confirmed wrecks are only a small percentage of the total number of ships and boats known to have gone to the bottom of the bay. The Grand Traverse Bay Underwater Preserve Council has its own website and Facebook page www.gtbup.org, featuring extensive photos and videos of the wrecks it has surveyed.

Find great rates on hotels in Traverse City through our secure booking engine!

Have your kids gone scuba diving?  What age do you think is best suited for diving? Let us know in the comments below!

« Bring the Kids and Eat Your Way Through the Big Apple
Welcome to Best Kid Friendly Travel! »