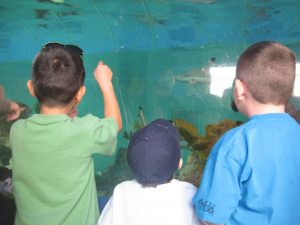 Less than 10 minutes north of the crowds at Sea World, Birch Aquarium at Scripps Institute of Oceanography, UC San Diego has a much quieter, low-key atmosphere, with tons for kids to do. They succeed above and beyond their mission to provide ocean science education and promote ocean conservation, and provide a family friendly attraction that is genuinely fun for all ages!

As we approached the Birch Aquarium, the life-sized whale fountain captivated my 4 year old son, along with every other child entering that day.  Right away, I noticed the little outdoor café to the left had healthy offerings with kid-appeal, like peanut butter and banana wraps among others, on the menu.

We met our tour guide, Jessica, and she showed us to the shark tank just in time for the feeding frenzy.  The shark feeding was a super-fun frenzy, but not by the sharks… the kids in the crowd played on each other to get all hyped up watching the sharks and stingray enjoy their lunch… so cute.

Walking through the exhibit, we saw many animals native to the ocean waters below; pacific seahorse (one of the largest seahorses in the world at an average of 8 inches long), scythe butterfly fish (in the Birch Aquarium logo), and a kelp forest in a 70,000 gallon tank, are just a few highlights from the more than 60 tanks of marine life. Outside on the rear patio overlooking the beautiful Pacific Ocean and La Jolla Shores Beach, kids can touch starfish, sea cucumbers and other animals in the tide pools representative of the wild tide pools of the beaches below.

On the other side are the interactive exhibits that are hands-on fun!  Right now there’s one on climate change and one on how air and land pollution affect the oceans.  All the exhibits are done in a thoughtful way so that while kids are playing they don’t realize they’re learning something until you ask them later.  At bedtime every night I ask my son, “So what do you think about what we did today?” After the Birch Aquarium, he said, “I had no idea penguins were so big! It was almost as big as me!” (There was a single Emperor Penguin statue in an area near the puppets. Had he not mentioned it, I would have forgotten about it altogether! )

I would HIGHLY recommend adding a visit to Birch Aquarium at Scripps to your list of must-see attractions in the San Diego area. Make a day of it and go the beach at La Jolla Shores Beach after your visit.