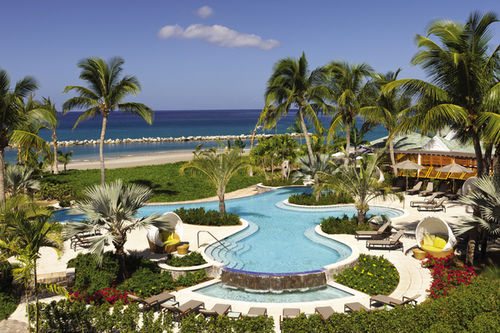 As every parent knows, it’s hard to let go and send your baby off into the world — even if your “baby” has a hard shell, weighs 350 pounds and lives in the Caribbean Sea.

So it’s to be expected that there were some cheers — and a few tears — at Four Seasons Resort Nevis when Neve, a 350-pound female, was tagged with a satellite transmitter and released into the wild just a few weeks ago. Though all the remarkable reptiles found on the island’s beaches are like family, Neve is just a bit extra-special.

Why? Well, unlike her 10 Hawksbill sea turtle “siblings,” Neve is the first ever green sea turtle to be tagged and tracked. Now, every time she surfaces to breathe, a GPS system will plot her path so that scientists can study her behavior and improve protection measures for her endangered species.

Situated on one of the most picturesque beaches in Nevis, the Resort is fertile ground for nesting turtles from June to October. So, lucky nature-loving guests can enjoy guided turtle-watch walks with the volunteer Nevis Turtle Group. And to help kids aged three to nine come out of their shells, there’s Sea Turtle Camp — children can “adopt” one of the turtles, then follow its progress on the Sea Turtle Conservancy’s web site once they get home!

Nesting season is halfway through, so bring your family to vacation with our “family” at Four Seasons Resort Nevis today.  Uncover a little-known wonder in the Caribbean: Nevis, sister island to St. Kitts in the tradewind-kissed Leeward Islands in the West Indies.