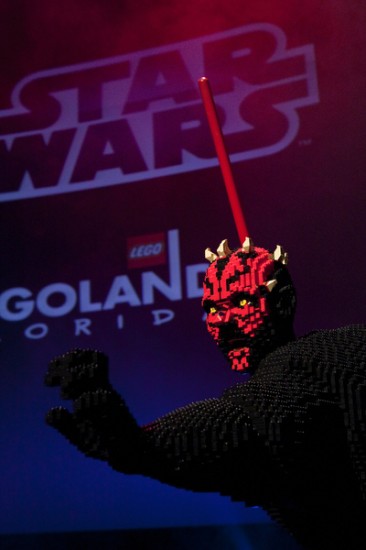 The new LEGO® Star WarsTM Miniland will include a scene from each of the six live-action Star WarsTM movies, as well as a scene from the animated series Star Wars: The Clone Wars™ all created from more than 1.5 million LEGO bricks and built in 1:20 scale. Some of the 2,000 LEGO® models will be more than 6-feet-tall. Interactive buttons will allow children to activate animations throughout the scenes.

LEGOLAND® Florida is a 150-acre interactive theme park dedicated to families with children between the ages of 2 and 12. With more than 50 rides, shows and attractions and the all-new water park, LEGOLAND is geared towards family fun! There are currently four other LEGOLAND Parks in the world – LEGOLAND California in Carlsbad, LEGOLAND Billund in Denmark, LEGOLAND Deutschland near Günzburg, Germany and LEGOLAND Windsor outside of London and just opened LEGOLAND Malaysia —the sixth LEGOLAND Park and first in Asia. The LEGOLAND theme parks are a part of Merlin Entertainments Group, the second largest attractions operator in the world. For the most current information, log on to www.LEGOLAND.com.

MERLIN ENTERTAINMENTS is the leading name in location-based, family entertainment, and has seen the most successful and dynamic growth of any company in the sector over the last five years. Europe’s Number 1 and the world’s second-largest visitor attraction operator, Merlin now operates more than 90 attractions, seven hotels/two holiday villages in 21 countries across four continents. The company aims to deliver memorable and rewarding experiences to its 46 million visitors worldwide, through its iconic global and local brands, and the commitment and passion of its managers and more than 20,000 employees. Merlin currently has seventeen attractions in the USA including the stunning LEGOLAND Florida theme park with its new Water Park; LEGOLAND California theme park with its exciting Water Park, and SEA LIFE Carlsbad Aquarium (LEGOLAND California Hotel is opening in summer 2013); Madame Tussauds attractions in New York, Washington, D.C., Las Vegas, Nevada and Hollywood, California; LEGOLAND Discovery Centers in Chicago, Illinois; Dallas/Fort Worth, Texas; Kansas City, Missouri; and Atlanta, Georgia; and SEA LIFE aquariums in Phoenix, Arizona; Kansas City, Missouri; Dallas/Fort Worth, Texas; the Mall of America in Minneapolis, Minnesota underlining the company’s position as the world’s biggest global aquarium operator.