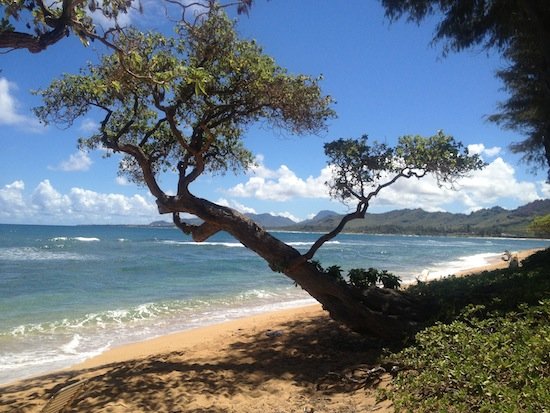 Our view from the Aston, and still a short walk from the center of Kapaa town.

On the east side of Kauai, Hawaii, is a nice little town that could be mistaken for any small town in mid-America. Except it isn’t in Wisconsin or Kansas. It’s in Hawaii, on the coast of the “Garden Island,” which makes it in and of itself more interesting to us mainland lubbers. It’s also in the center of a gorgeous area accessible to all ages.

Earlier this year, Kapaa was named one of the top ten cities for young families in the state of Hawaii by the consumer advocacy website, NerdWallet. We’ll take their word for it that the schools are good, that economic growth is sound, and that it is an affordable place to live (which is all relative in Hawaii).

Forbes Magazine confirmed that honor by naming Kapaa one of the country’s 15 ‘Prettiest Towns’. For family visits, we might say it’s in the top three spots in Hawaii. Here’s why:

It’s centrally located, but out of the resort-filled area along the southwestern side of the island. You’ll want to rent a car when you arrive at the airport in Lihue. From the airport to Kapaa is less than 20 minutes. Best of all, the drive from Kapaa to Hanalei at the top of the island or to Waimea on the west are about equidistance at 45-60 minutes drive time. While traffic can be an issue (there’s only so much space for roads between the ocean and the mountains), either drive is manageable with kids. Teens and pre-teens will love the variety of adventure options, especially along the northern coast. 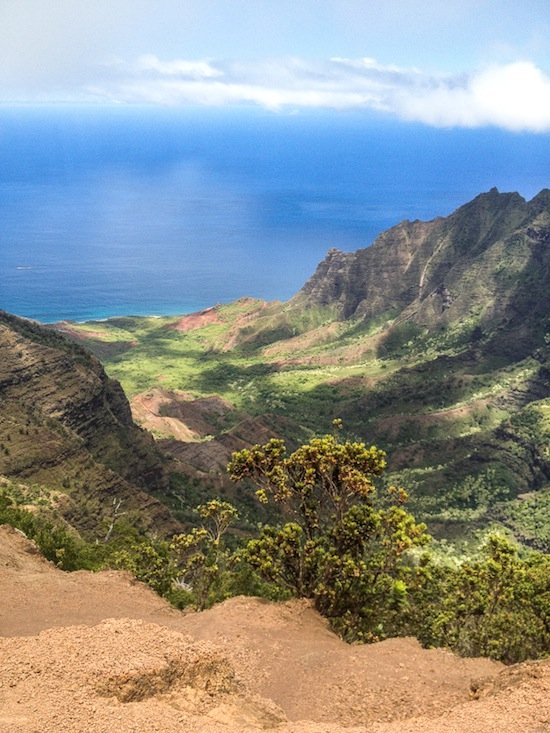 Accommodations are family friendly. We stayed at Aston Islander on the Beach, where our room’s patio opened to the grassy bank just above the beach. Kids and adults enjoy the pool and Jacuzzi (along with the poolside bar), everyone likes walking and playing on the beach, and eating options include outdoor grills, an adjacent take-out fish café, a very good neighboring restaurant (Hukilau Lanai at the resort next door), and Trees Lounge, which offers good food and music in addition to a solid drink. You might find the rooms dated, but the conveniences (laundry!) are there. Look for the wonderful orchid garden outside the lobby.

A word of caution, this is not the best beach on the island for swimming. The nearby Kapaa Beach Park is where the locals go, and is life guarded. Warnings about riptides are posted prominently. (Elsewhere in Hawaii, and in particular at the airport arrival concourses, you’ll see plenty of information abut water safety. Take it seriously.) I took a swim, but stayed close to shore. Water shoes are recommended to prevent cuts from underwater rocks and coral.

The town of Kapaa is the real deal, not a shopping center with chain eateries built up for the hotels. Stopping at the famous Ono Ono Shave Ice counter of the Ono Family Restaurant is mandatory, and reminds us of Crazy Daze in our hometowns. A fine Mexican place, Verde Restaurant, will satisfy all with exceptional tacos. Breakfasts or a dessert break might be had at Art Cafe Hemingway, and a few food trucks are strategically parked near the most popular beaches. It’s easy to find groceries, a drug store, and a post office, all of which we used during our stay.

Waimea Canyon, the grand canyon of the Pacific in the middle of Kauai, is a great side trip from the beach.

The island of Kauai

The beauty of the island itself (and accessibility from Kapaa) is another reason we love this place. Head north and see Hanalei (of Peter, Paul, and Mary’s Puff the Magic Dragon fame). Stop to photograph or hike the mountain coves of Napali Coast State Park, where Jurassic Park was filmed. Drive to the central valley to visit the Waimea Canyon. Or check out the west coast’s Barking Sands just below the Pacific Missile Range Facility.

All these things are easy day or half-day excursions, so those of us with short attention spans don’t tire of any one place. For more adventure from different perspectives, plenty of options beckon for teens, pre-teens, and adults. Kayak below the wild mountains of the north coast. Explore the caves near Haena Park and the nearby (lifeguarded) beaches. Hop on a helicopter for thrilling rides into the canyons, and over the coastal peaks.

And if the water and sun and landscape aren’t enough, check out the island’s famous agriculture by visiting a sugar or coffee plantation. The current debates over use of chemicals and genetically modified organisms will provide plenty of food for family dinner table discussion. 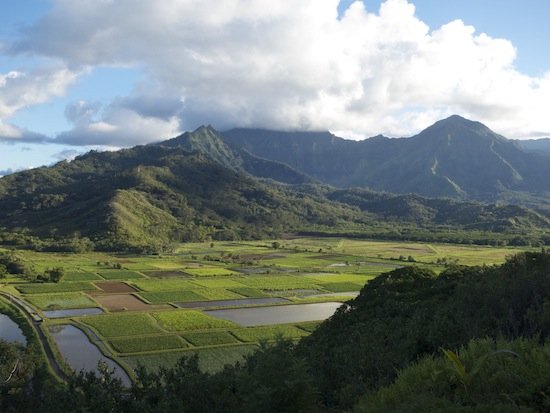 In this Wildlife Refuge, rice crops have been re-introduced to protect wetlands and waterfowl.

While some of Hawaii’s tourism numbers are down (spending by Japanese visitors dropped almost 20% from July 2012 to July 2013), Kauai has been moving ahead. We believe that’s due to their efforts to keep Kapaa and small towns like it authentic and welcoming to residents and visitors both. The Aloha spirit abounds in Kapaa.

N.B. Direct flights from Oakland to Lihue, Kauai, are scheduled to begin in 2014.

« Enjoy a Family Vacation in Dublin, Ireland and Save!
Explore the Wild Frontier in Anchorage, Alaska! »