A vacation on the Red Sea should be on your bucket list. You have several choices, Eilat Israel (the dominant choice of the Western World) Resorts of Egypt or Aqaba, Jordan.

I chose the Movenpick Resort at Tala Bay near Aqaba and I am glad I did. I am told that the beaches here are nicer than in Eilat. So if you like the beach, this is the place to be. I am 5 miles from Saudi Arabia, 10 miles from Israel and 15 miles from Egypt.

Getting here was an interesting adventure. Most people fly to Amman Jordan and come here by ground transportation. I flew to Eilat and came by ground but, Israeli taxis don’t come into Jordan and Jordanian taxis don’t go into Israel, so I was dropped at the border and walked into Jordan (I don’t think I ever walked across an international border before) and took a taxi to the Movenpick.

This is a very international resort, plenty of guests from all over the world , many of whom work and live in the Middle East. But there are Americans, Arabs and many come from the Scandinavian countries in winter. Even Israelis have started coming here because of the beaches and the price.

How family friendly is it? There are approx 300 rooms and half are family rooms (with a closable space that has 2 beds for the kids.) And the kids stay free. The Dana Kids Club can keep the kids busy from morning till nightfall (and then if you need a babysitter for the evening, they have that too). The kids club has too many activities to list but special mention should go to the time they spend with the pastry chef learning how to bake (in a small chefs hat and apron) There are several pools (one is adults only and one is kids only) and many activities on the Red Sea too; Jet Skis, snorkeling, scuba diving, glass bottom boat, and even a submarine ride. This is an excellent place to learn diving. The guides of Sinai Divers are wonderful and the corals are teaming with beautiful marine life. The Red sea, in general, is heralded as one of the best scuba areas in the world.

Mom, if you want a spa, this one is outstanding with many spa treatments available. I chose an Ayurvedic treatment on my scalp with running hot oil that was wonderful and relaxing.I could feel the stress just melting away.

The grounds are magnificent, every kind of food and restaurant is on premises and a breakfast buffet that has everything you can think of, and its just a fun place to be. If ancient history interests you, Petra is just 80 miles away. 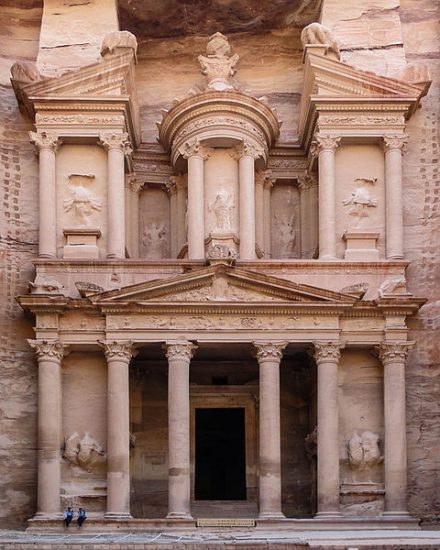 Is in the south of Jordan 3 hours drive south of Amman and a one hour drive north of Eilat Israel. It is in the Wadi Musa (Valley of Mosses) and the tomb of Aaron is nearby.

The Nabateans occupied Petra sometime around 300 BC. They built phenomenal buildings into the rock wall cliffs. The two greatest, that are still standing, being the Treasury and the Ad-Deir Monastery. It’s a healthy uphill hike to this Monastery but well worth the effort. They developed cisterns and a very advanced system of water pipes to keep the valley from flooding, to hold drinking water and to carry the water to the fields for irrigation.

The entrance fee to the historical site is 50 JD for the day. (two days for 55) To experience the entire site might take 2 or 3 days. I only had one seven hour day and I probably walked 8-12 miles. The first point of interest is geological. You enter through a half mile slot canyon with steep rock walls on both sides. The light in here is constantly changing and thus what you see changes regularly throughout the day. As you come to the first clearing you are overwhelmed with the site of the old Treasury bldg, built into the face of a rock cliff. It is astounding to think that this was built over 2,300 years ago. Then come cliff dwellings, the homesteads of these Nabateans, Royal tombs and an Amphitheater.

I would like to tell you about Petra at night, because a couple nights a week they open it at night so you can experience it all lit up– I was greatly looking forward to that but for some governmental reason it was not open the night I was there.  This place is very difficult to describe, you just have to experience it.

There are several hotels in Petra. I stayed at the Petra Moon which was just a block from the entrance to the site. The service there was wonderful and the rooms luxurious with flat screen TV and wireless internet in the rooms. I recommend this hotel highly.
_____________________

« Explore Vienna, Austria with Kids and Save!
Book Now to Save on a Family Vacation to New Orleans, LA! »